August 26, 2014/sneha@groverwebdesign.com/Comments Off on IndyCar at Sonoma — the Simraceway Performance Driving Center Way 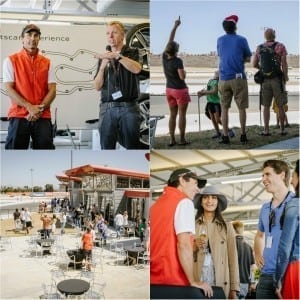 There’s no better seat in the house than inside turn 1 at Sonoma Raceway when the green flag drops for the IZOD IndyCar series. As the drivers jostle side-by-side up the hill to the always eventful turn 2, the smell of fuel and scraping under trays & sounds of higher powered V6 Turbos is something you can’t get through a TV screen—and that’s exactly what guests of Simraceway Performance Driving Center’s IndyCar VIP Party got to experience last week as the IndyCar series raced the penultimate round of the 2014 season. And what a race it was, possibly the best ever in the many seasons the IndyCars have been coming here, culminating with the drama of a pass with 2 laps to go to crown Scott Dixon the winner!

From champagne to canapés, and sports cars to skyjumpers, there was always plenty going on during the day. Whether you were coming in fresh from the Audi sportcar experience’s polo match and seeing the spectacle of high speed formula cars for the first time, or one of the F3 series championship competitors reliving your own moments out on the 2.5 mile roller coaster that is Sonoma Raceway.

A pre-race chat hosted by Simraceway chief instructor Nico Rondet and program manager/professional auto racing podcaster Paul Charsley covering IndyCar rules, facts, strategies and track talk prepared new and old fans. There was also Simraceway simulators on hand to give everyone a feel for what it’s like to be out on the big track as well the full gamut of Simraceway and Audi sportscar experience’s fleet of performance and race cars to get up close and personal too. But for sure the most popular “seat” was on your tippy toes and against the fence as the IndyCar warriors thundered by lap after lap.