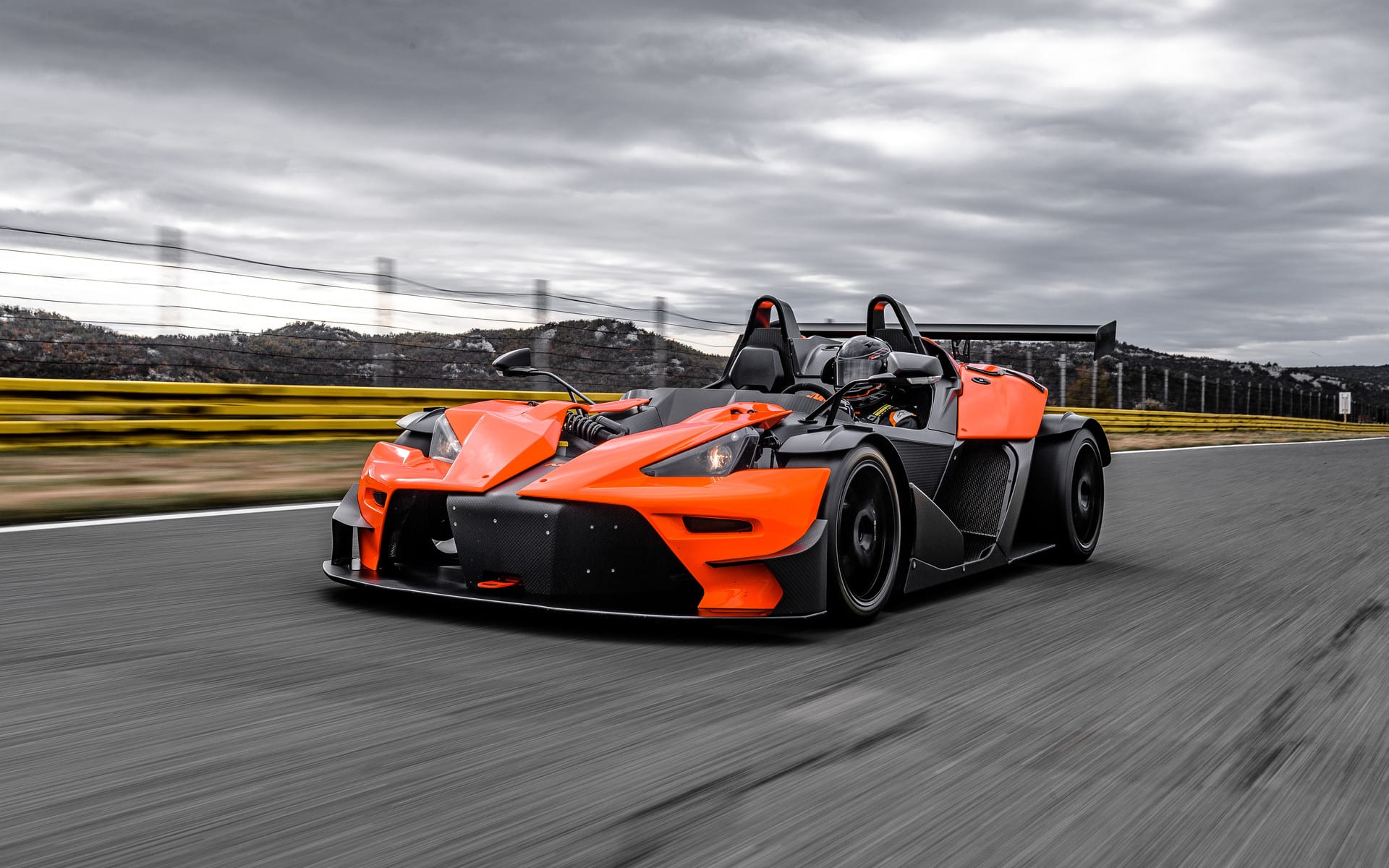 A street legal racing car. It’s the dream and a term that gets used and abused by manufacturer special edition barges with racing stripes and deep dish alloys. With Project Wondercar, the KTM X-Bow COMP R, we have the purist, rawest and most spectacular driving experience you can get on four wheels.

The Austrian superstar is ready and waiting at our performance center at Sonoma Raceway, California, to show you a whole new world. It’s a world without windshields, it’s a world where the wind pounds your full-face helmet and it’s a world of go-kart fast reflexes and driving fun.

Skim the asphalt at 145mph!

Icons Give Way To The Experience

The X-Bow is different. It’s small, its exposed and it’s a racing car tamed just enough for public consumption. It’s the ragged edge of driving.

We have learned lessons from the past and previous track car titans that included the Audi R8 V8 and McLaren 570 S. They were apex predators, but they were built for the road. These high-powered rockets were built to insulate the driver from the experience. They are polished, and we wanted visceral.

With just 300bhp and 310lb/ft of torque, the X-Bow COMP R isn’t intimidating to drive, but it’s seriously quick. It weighs just 1,740lb. That’s basically half a Porsche 911 and it’s this power-to-weight ratio that is the essence of the X-Bow COMP R’s magic.It’s a super sportscar like you’ve never experienced before. It’s a real racing car for the road.

Track tires and downforce are all part of the KTM X-Bow experience. This car will raclibrate your sense of speed.

We know racing cars and have run them for years at Sonoma Raceway and across the United States. A racing car is a different animal. We wanted to bring that pure feeling of speed you get in an open-wheel racer to the people, without the complexity, breakdowns and headaches that go with thoroughbred racing cars.

Safety was always a non-negotiable. We want our clients to enjoy the same protection as elite racing drivers, from the carbon-fiber chassis through to the FIA crash box and 6-point safety harness. We also wanted an approachable car that the driver can push without relying on a mass of electronic driver aids.

We needed two seats so our expert driving instructors can show you just how to get the most out the car and the track, as well as offering high-thrills passenger rides where you can feel a modern supercar at the absolute outer limits. Then we looked for a car with potential for a racing series on US soil.

We wanted the impossible and scoured the globe to find it. On a chance trip to Austria, we found it.  The KTM  X-Bow R stepped up to the plate and delivered on all counts, smashing it out the park and becoming an instant hit on its arrival at Sonoma.

Meet the fleet that will raise your heartbeat. 7 KTM X-Bows get ready for a hard day on the track..

The X-Bow has already broken a number of the records at our home circuit, Sonoma Raceway, beating times set by its more powerful pre predecessors from Audi and McLaren.  The KTM is the new King of the Hill around our challenging 2.52-mile home circuit.

The lightweight, low-slung rocket that is the KTM X-Bow R has blown the competition off the track. It slams through 60mph in 3.9s and tops out at 144mph, but those numbers simply don’t do this road rocket justice. It comes alive in the bends.

You will attack corners like never before in the KTM X-Bow R at the Sonoma Raceway.

Connect With The KTM

You will see the car respond as the front wheel clips the curb on a high speed bend. You’ll feel the back end move as you learn to control the perfect slide under the watchful eye of our instructors and you will feel the Alcantara-wrapped wheel dance in your hands as you find the absolute limit.

You’ll take the hit in the back as the turbo comes on song when you power out of the bend and the engine screams in your ear to go faster down the straightaways. The wind will lash at your helmet, you’ll feel pure speed and it’s an emotional moment that will stay with you forever.

With the racing suspension, basic downforce and a lightweight frame, the KTM X-Bow simply destroys conventional road cars of any caliber in the corners. Grippy, track-bred tires mean you can corner on rails or slide through the bend. Either way, it’s a car that will recalibrate your concept of speed.

Feel Part of the Car in the X-Bow

More than the Audi, more than even the McLaren, the KTM makes you feel part of the car. That instant, synaptic response will help make you a better driver, too, as you learn to master this grown-up go-kart that goes deep into triple figures.

That low-slung front splitter and minimal ground clearance are a challenge on the public road, but at our performance driving center you don’t need to worry about the practicalities of life. It doesn’t matter that you’re almost lying down, with a crash helmet and racing gloves on. You’re just here to have fun and the KTM X-Bow R is mainlined adrenaline.

The X-Bow R has become a cult car in Europe, and now it has arrived in the USA at Sonoma Raceway..

The Birth of the KTM X-Bow

Motorcycle manufacturer KTM made its name with endurance and Moto X bikes. It announced its ambitious plan to bring motorbike like thrills to four wheels back in 2008. Now there’s a European racing series, the X-Bow is a star at tracks around Europe and it can do the same on US soil.

KTM worked with Audi and chassis experts Dallara, which produces cars for everything from IndyCar and Formula One and World Sportscars through to junior racing series. The resulting carbon-fiber chassis is stiffer than steel, lighter and safer.

The X-Bow has transformed into the R, and the RR is coming…

Evolution of the R

KTM started out with a 240bhp version of Audi’s 2-liter turbo engine that features in everything from the VW Golf to to the Audi A6. Now it’s pumping out 300bhp in the X-Bow R and  the car has evolved over time. There isn’t much to the KTM, but everything there is race-bred and that comes at a price.

The X-Bow R isn’t official in the USA as yet and this is one of the first cars on these shores. Just know that you won’t get change from $100,000 for a KTM X Bow R that is fully ‘Ready to Race’. Of course, you can just come and drive ours like you stole it for the day instead. You have fun, and let us worry about the bill….

The KTM X-Bow R is the next step in driving thrills and it really is a cutting edge four-wheeled motorbike. Come and feel it for yourself, and find out just what this street-legal racing car has to offer.

Check out the full range of KTM driving programs here.