Simraceway F3 Series 2017 Kicks Off to a Great Start

May 17, 2017/sneha@groverwebdesign.com/Comments Off on Simraceway F3 Series 2017 Kicks Off to a Great Start 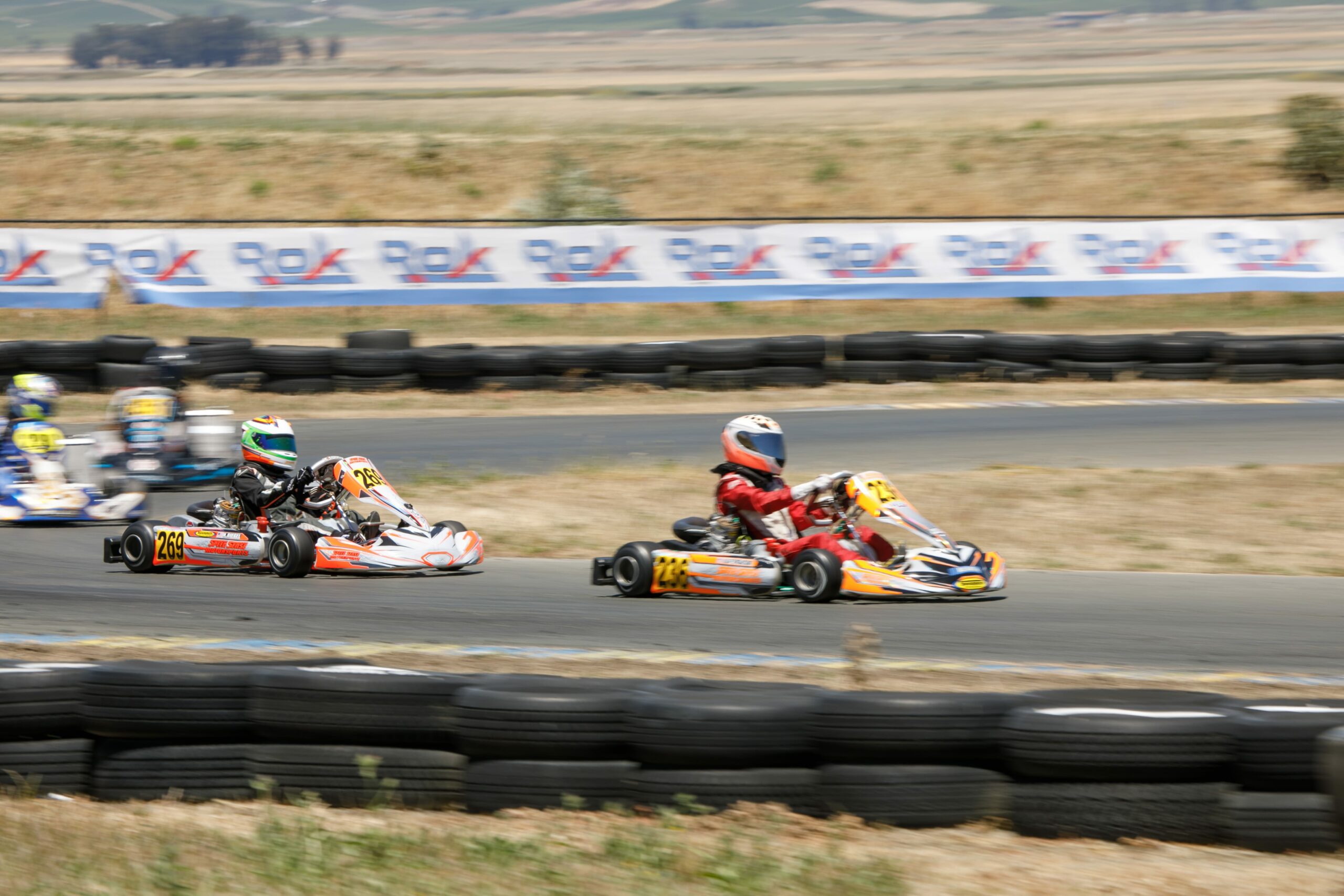 After a successful 2016 season, many of the drivers were eager to get back into the exciting Lola Simraceway Formula 3 car and hone their craft

The morning practice sessions went well as the drivers were shaking off their winter rust and getting ready for their qualifying session. After the new Pirelli race tires were bolted on, they took to the track. The field would be split into two groups according to their practice times. Each group would get 15 minutes to lay down their best lap. At the end of qualifying, returning champion John Schauerman utilized his new Pirellis and on his ideal 3rd lap, laid down a 1:38.155. Gus Doppes was looking strong right from the first session. He was able to put down a great lap on his last go, it was good enough for the second spot on the front row with a 1:39.291. Roy Block was ready as well to pick up the third spot on the grid with a solid final lap in qualifying of a 1:39.587.

The 9 cars took the green flag and headed up into turn one. John Schauerman got a great jump at the start and instantly had a 3 car length gap. The entire field had a calm first two laps with no changes in position as they settled into the fight. Gus Doppes was looking very consistent and confident, hanging on with Schauerman in his sights as they both started to gap the field. The battle for third became the exciting action in the field. Roy Block, currently in third, was starting to feel the pressure from newcomer John Purcell. That pressure allowed Mike Dardin in 5th to close up and join the hunt for the final step on the podium. Dardin was closing fast on Purcell and Block and put in his fastest lap of the race on lap 5. Purcell made a couple of tries on Block into turn 7 but was unable to make it stick. That move in 7 really allowed Dardin to get a good run on Purcell heading into turn 9 and Dardin capitalized with an aggressive pass into the first apex of turn 9, locking the front right tire slightly. Dardin was able to make it work and made the pass, moving him up to the fourth spot. He now had the third place of Roy Block in his sights and was closing in. Meanwhile, Schauerman was holding a comfortable lead on Doppes in second. On lap 10 Mike Dardin had a good run on Roy Block heading into turn 11. Dardin dove to the inside and was side by side with Block as they exited the turn. Dardin was able to get a slightly better run out and took the third spot. New to the series, Mark Seigel was holding the 6th spot comfortably ahead of Jeff Stern in 7th, Jonathan Haswell in 8th and Walter Kuhn in 9th. John Purcell would attempt a couple more times on Roy Block in 4th but was unable to shake the veteran loose. Ultimately, John Schauerman would take the win and fastest lap of the race with Gus Doppes in second and Mike Dardin in third.

As racers began to feel more comfortable with their cars after a good day of racing under their belts from the previous day, series veteran John Jastremski joined in for his first race of the season. Wasting no time, and shocking the instructors and racers alike, Jastremski went quickest in the early morning practice 1 and suffice to say we had a new contender in the mix for the day. John Schauerman was not going to make it easy and newcomer John Purcell was looking to be a factor to be feared as well. Schauerman had a slow start to his qualifying session as he struggled to get into the 1:39’s on his first four laps. Meanwhile, John Jastremski layed down a 1:39.554 on his second lap and confidently parked his car. Schauerman was not to be outdone.

The 10 car field took the green flag and hurled up the hill. John Schauerman again was able to get a good start and keep the lead with Jastremski close behind. Mark Seigel got a great jump and picked up a spot from 8th to 7th before turn one. Gus Doppes moved up one spot into third. Gus described his start, “I put the gas all the way to the floor, closed my eyes and upshifted”. On lap 2, Mike Dardin had a good clean pass for the 4th spot into turn 9 as he got a good run on John Purcell. Schauerman and Jastremski stretched their lead on the field while Dardin was closing in on Gus Doppes in third. Mark Siegel was glued to the gearbox of Roy Block as he tried to find a way by for the 6th spot. The battle for 9th was a good one between Walter Kuhn and Jonathan Haswell as they had many laps of close action. Schauerman, in the lead, was starting to pull away from Jastremski on lap 5. Mike Dardin had an exciting high speed moment when he spun in turn one and came to a stop in the grass on the inside of turn 2. He was able to keep the car going and quickly returned the fight, only losing one spot. Gus Doppes would spin in turn 9 from the third spot. He tried to get the car turned around quickly but unfortunately returned to the race in 8th. Jonathan Haswell finally got a good run on Walter Kuhn after many attempts and passed him into turn 7 on lap 7. Mike Dardin, with injured tires from the spin, allowed Roy Block and Mark Siegel to close up and show themselves hungry for the fight for 4th. Head instructor Nico Rondet said “It looks like Mike is using his tires as a smoke screen to keep Roy Block and Mark Seigel at bay.” Meanwhile, John Purcell now in third, driving steady and clean allowed him to close slightly on Jastremski in second. Mark Seigel trying to fill the mirrors of Roy Block had a big Hollywood sideways slide on the exit of turn 2 and kept it going. This seemed to work as Block had a moment of 4 wheels through the dirt in turn 9 on the same lap, allowing Seigel to close in. Gus Doppes and Jeff Stern now had a great battle for the 6th spot, Doppes getting the better of the battle as he moved to the inside of Stern into turn 7 and they had a drag race out on the second to last lap. On the last lap Mark Seigel finally found his moment and closed in on Roy Block heading into turn 7. He set up a perfect inside pass, Block defended and went inside into 7A, Seigel gripped tight and spun trying to keep the spot. In the end, John Schauerman would take the win and fastest lap of the race with a 1:39.334 and a 15 second lead over John Jastremski in second. John Purcell having a steady race for the third spot on the podium.

As day three kicked off fatigue, fitness, and mental stamina was the subject on many of the series instructors minds. The cars headed out for qualifying as John Schauerman looked to keep his streak alive. The grid looked to be a fresh mix on day three. Schauerman was able to take his third pole position with his lap of a 1:38.177. John Purcell, keeping his progress steady, layed down a great lap of a 1:38.273. Mike Dardin, with a fresh set of tires and a fresh mode of attack was able to grab the third spot with his lap of a 1:38.885.

The 10 cars took the green flag and again John Schauerman would lead into turn two with John Purcell staying close behind in second. John Jastremski with a great jump was able to take third from Mike Dardin. Roy Block was the one with the best first lap though. Block got a great start and moved up one spot and then again he had a great turn three exit and pounced down the inside of Jeff Stern into turn 4, taking the 6th spot. Walter Kuhn would have a good pass on Jonathan Haswell into turn 4 as well. Mike Dardin, flustered from losing a spot at the start, found himself in a good spot to take it back from John Jastremski in turn 7 for third.

On lap 4 Gus Doppes closed in on John Jastremski in the 4th spot and put down a great pass into turn 7.

Walter Kuhn was having a good battle with Jonathan Haswell and Mark Seigel for the 8th spot. Seigel with a clean pass into turn two would take the spot from Kuhn. The three of them had an action packed race together–Haswell and Kuhn going back and forth frequently.

Schauerman in the lead had his mirrors full of John Purcell trying to end his winning streak. Finally Schauerman had some pressure this weekend and would have to keep it mistake-free, with no room for error. The pair started to gap the field considerably at the halfway point. Mike Dardin in third was able to keep the leaders just in his sights.

John Schauerman took the checkered flag for the race win. John Purcell finishing second and would take the fastest lap of the race with a 1:38.881. Mike Dardin finished third.

At the conclusion of the race and the three day weekend, the drivers exited their cars  and made their way to the purpose-built Simraceway facility, perched directly on turn one of Sonoma Raceway. Music was in the air and a sense of marathon accomplishment loomed from the long weekend within these challenging cars. The podium celebration was set and the trophies were lined up.

In third, Mike Dardin was called up as he was awarded for the efforts of his weekend. He received his trophy with spirit and shows a lot of promise to come.

Second place was awarded to John Purcell, on his introductory effort with these cars. He is showing himself as a force to be reckoned with in this series and we are eager to see him in the next round.

The winner of the weekend, was definitively John Schauerman. He had a great start to the 2017 Simraceway F3 Summer Series: three race wins, three pole positions, and two fastest laps of the race. His smart and strategic driving is the textbook of how to become
a champion.

The media was there and the cameras were clicking, just as the large bottles of champagne were released–spraying in the air. A temporary sting in the eye is always worth the sweet taste of victory!

The Simraceway F3 Summer Series Round 1 was one for the books and there are many talented drivers hungry for the win, and up and coming stars improving with each outing. Join us for round 2 June 9th, 10th, and 11th.